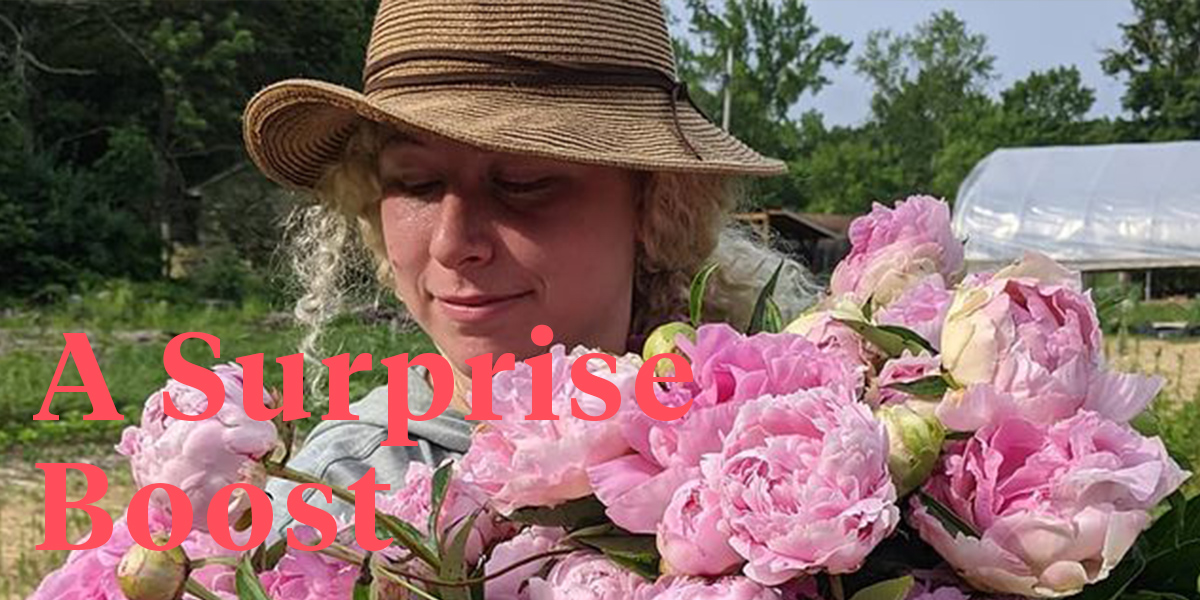 The corona pandemic was a surprise boost for local businesses centered around floral agriculture. This is a story of how this affected the flower market positively for local farmer-florists.

April 9, opening day for Tiny Hearts Flower Shop in Hillsdale, N.Y., was a long time coming. Buckets of crimson ranunculus and towering boughs of pussy willow-lined the walls, brightly awaiting local shoppers. Pails of blue anemones, grown a few minutes away in Copake, ranging from deep indigo to an ethereal gray-blue. Like so many American businesses, the shop shuttered while the pandemic raged. Owners Luke Franco and Jenny Elliott scrambled to figure out what to do with the 40,000 tulips planted in October 2019 that sprouted into a world where weddings and baby showers were replaced by a smattering of Zoom affairs needing only a token bouquet. 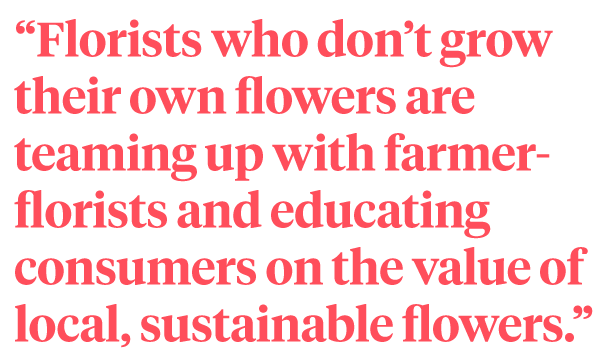 Prior to all this, the picture was far rosier. Local farmers had been making inroads into the cut-flower market, a multibillion-dollar industry whose complicated supply chain brings imported blooms from Africa and South America to the U.S. via the Netherlands. Although 80% of the cut flowers purchased in the U.S. are still imported, the value of domestic floriculture rose 9% from 2015 to $4.77 billion in 2018. The number of producers increased 8% during the same period, according to the U.S. Department of Agriculture.

Floret Flowers, founded in 2008, has built a small floral empire and inspired many would-be growers; Pepper Harrow is a very successful operation in Madison County, Iowa; Clear Black, a specialty cut-flower farm in Durham, N.C., focuses on sustainable practices. Franco and Elliott started in May 2011; this year, two of their employees planted their own farms. These farmer-florists, as they’re increasingly known, have thrived by selling and marketing flowers directly to consumers and forming partnerships with floral designers and event companies. The same eco-conscious clientele that boosted farmers markets and locavore restaurants seems eager to hop on board. And COVID-19 may ironically be the ultimate long-term boon to these smaller producers. 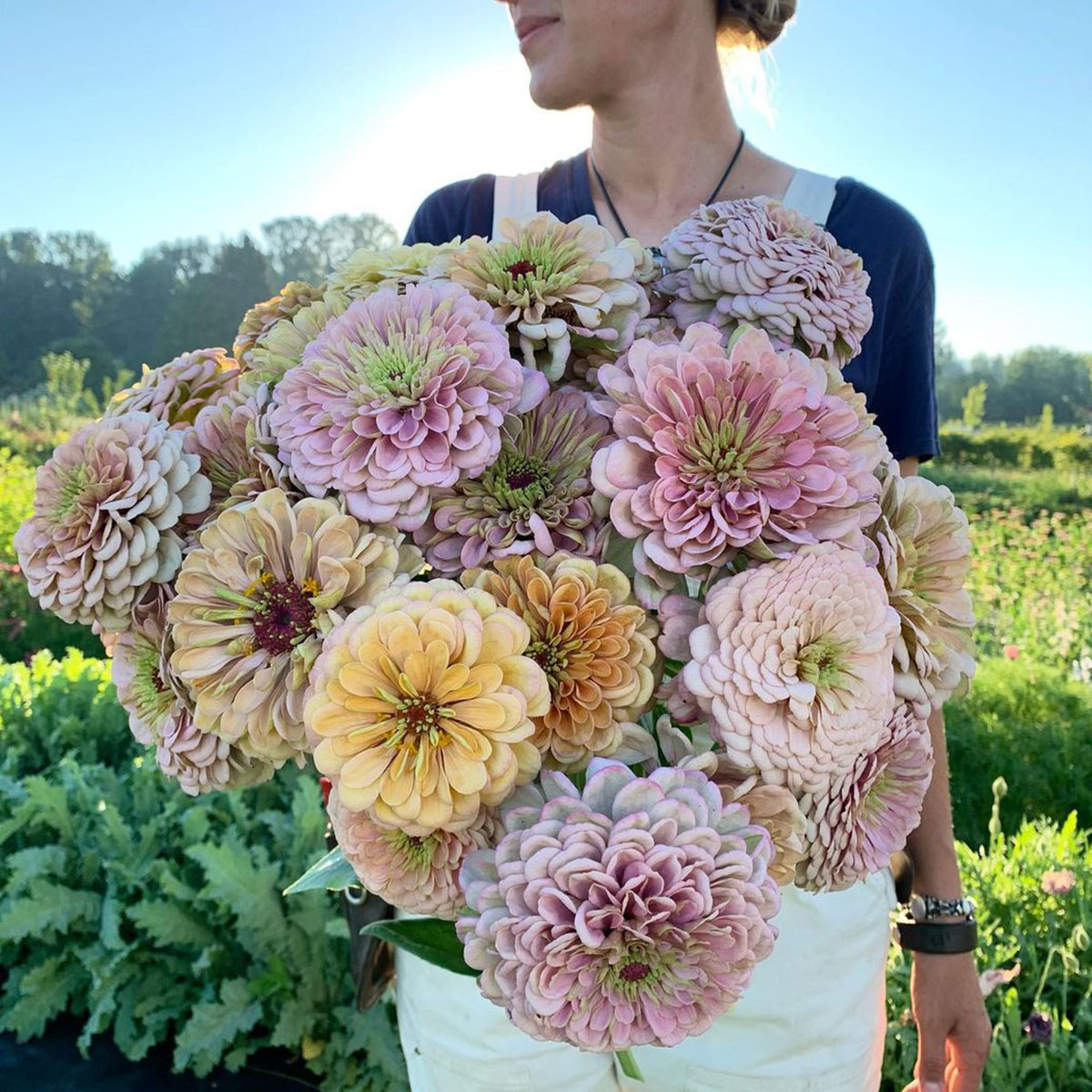 Last year just before Mother’s Day—one of the tentpoles of the spring flower season—it was almost impossible to buy a bouquet. An imported bouquet, that is. The massive wholesale markets that provided the bulk of the cut-flower supply in the U.S. had gone quiet when florists in many states weren’t deemed essential businesses. As a result, farmer-florists such as Tiny Hearts Farm received a deluge of attention. “The consumer interest exploded,” Elliott says. Seattle-based author and domestic flower advocate Debra Prinzing puts it even more bluntly: “The opposite of what we thought was going to happen took place. We saw more people embracing local agriculture and micro-farmers in their community.” Official membership in the Slow Flowers network, which connects consumers with local flowers, rose more than a third, to 880, from 2020 to 2021. Room for an Alternative

Commodity flowers — the carnations and imported roses and lilies available at every grocery store — have a considerable environmental footprint. Flown around the world, grown with a heavy dose of pesticides, and farmed with often questionable labor practices, such flowers increasingly stand in contrast to more sustainably produced luxuries. They continue to make up the bulk of flower purchases and are in no danger of vanishing soon, despite seismic shifts in the industry during the pandemic, but there’s now room for an alternative. Plenty of farmer-florists are ready to serve that market through a hybrid business model that allows them to charge more than commodity prices for specialty blooms, such as short-lived ephemerals and vintage varieties. It’s harder to grow a delightfully delicate and fragrant peony than it is to churn out dozens of identical lilies, sprayed heavily with chemicals and bred to be stiff and shippable. Growers who take on these added challenges find they can charge a premium by including the design of arrangements in their pricing and selling directly to consumers. Shoppers proved unfazed spending more on affordable luxuries during the pandemic. “We had blockbuster sales of poppies last year, which only last for about three days in a vase,” Elliott says. “People didn’t care—they were willing to spend the money.” 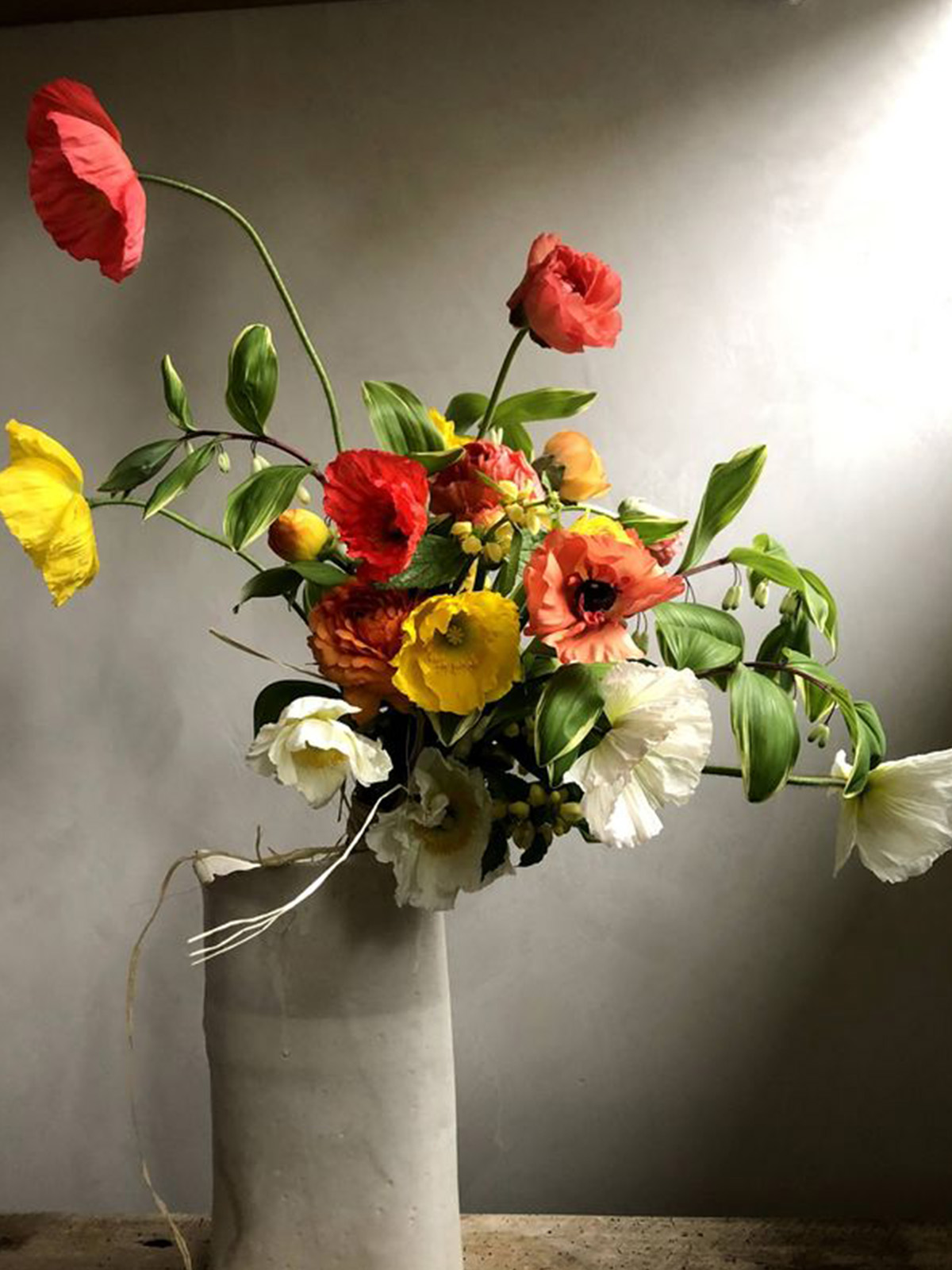 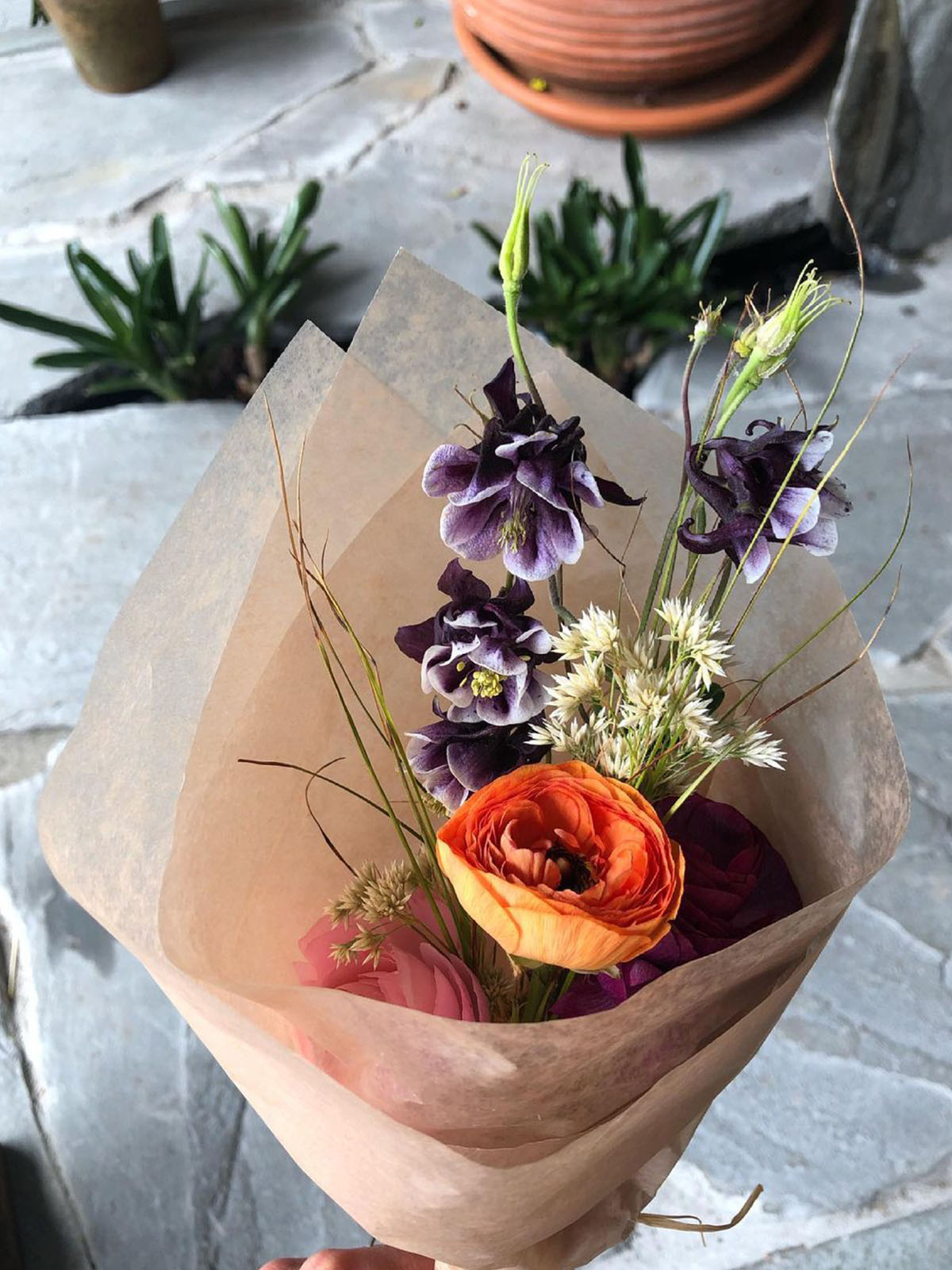 Florists who don’t grow their own flowers are also taking part in this changing floral landscape by teaming up with farmer-florists and educating consumers on the value of local, sustainable flowers. Taylor Patterson started Brooklyn, N.Y.’s Fox Fodder Farm—which is a floral design studio, not a farm—in 2011. She says her clients are willing to pay up for a delicate, sweet-smelling sweet pea or a short-lived poppy; they understand these limitations make the blooms rare and special. “It’s the same reason you would spend $5 on an heirloom tomato rather than 50¢ on a hothouse-grown one imported from Mexico,” says Patterson, who’s provided bouquets for fashion clients including Hermès and Carolina Herrera. A mixed bouquet from Tiny Hearts costs $25 at the store; a similar-size arrangement from the local grocery could cost the same but would have added layers of distributors and designers taking their cut, leaving much less for the original grower.

“Buying locally grown, organic flowers may seem like a luxury, but I find that I get the most beautiful flowers at a lower cost than the ones that are imported,” says Betsaida Alcantara, a Copake resident and weekly subscriber to the Tiny Hearts community-supported agriculture program. “It made me feel connected to the farmers growing them, despite the quarantine.” Some clients simply want to re-create an aesthetic they’ve seen on social media, which has added fuel to the movement. Pictures of dahlias plucked directly from the field—the “Café au Lait” dahlia remains an Instagram fave—or armfuls of heirloom daffodils are changing perceptions of floral beauty. 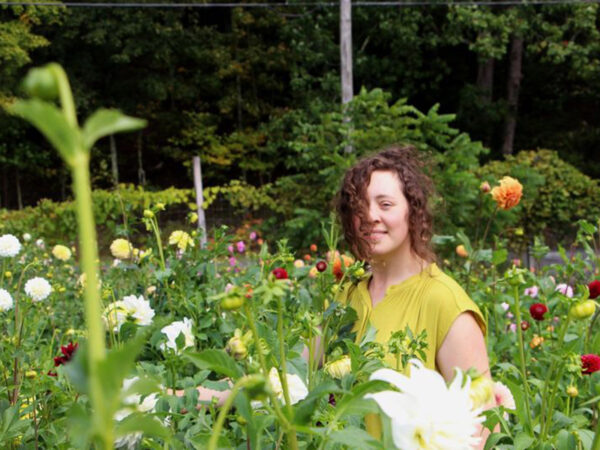 The Role of Social Media

“Social media ramping up during the 2000s has really contributed to the farmer-florist movement,” says Marybeth Wehrung, who runs Stars of the Meadow Flower Farm in upstate New York and has seen high-profile producers reach influencer status. “People could see all kinds of different things that they didn’t know existed. Books and podcasts are making it really accessible to learn about how to do this—flower production or designing or both.” Prinzing, the author, agrees: “To get the look that you see on Instagram—these dreamy, garden-inspired bouquets—you need those softer, ephemeral, irregular-shaped flowers. And colors that are muted and painterly and look like watercolors.” In other words, not “perfect” store-bought blooms. Wehrung contends that this market still has room to grow. “There have been some big blows to the big farms in Central America and other parts of the world because of climate and Covid,” she says. “There’s not a gaping hole but sizable openings for domestic U.S. producers to fill that need.” 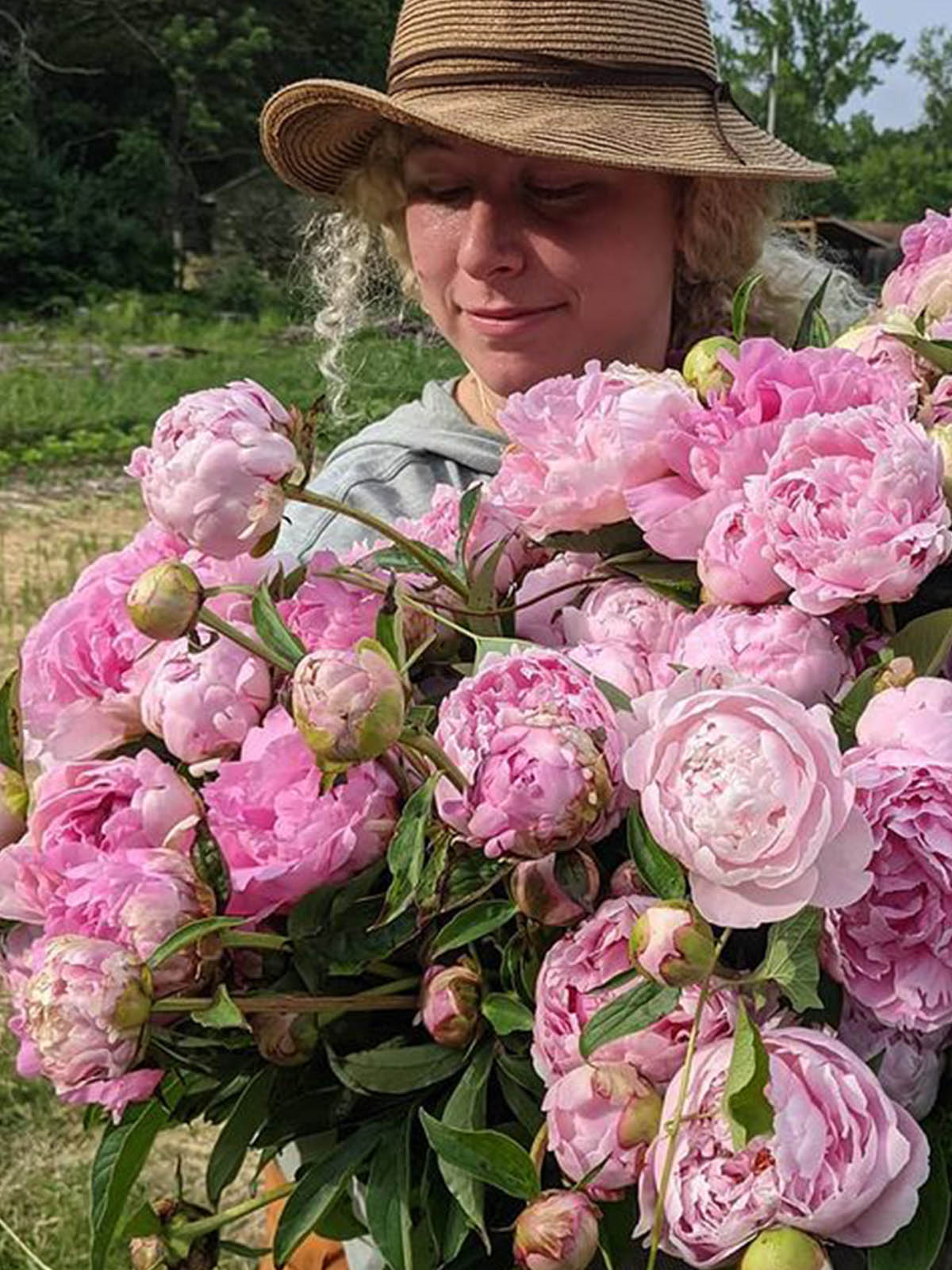 And that’s before weddings have even fully returned. Ann Marie Breyer, who grows flowers for New York City floral design company Nectar & Bloom, says that so far this year brides and grooms are much more willing to splurge. “I don’t know if that’s just the stress and anxiety of having to postpone or if it’s more of an appreciation of, well, we didn’t get to do this for so long,” she says. “I’m sure it’s a mix of both.” Franco is even more optimistic. “I think weddings are going to come roaring back,” he says. “It’s going to be the fall of love.” Words by Cara Parks for Bloomberg 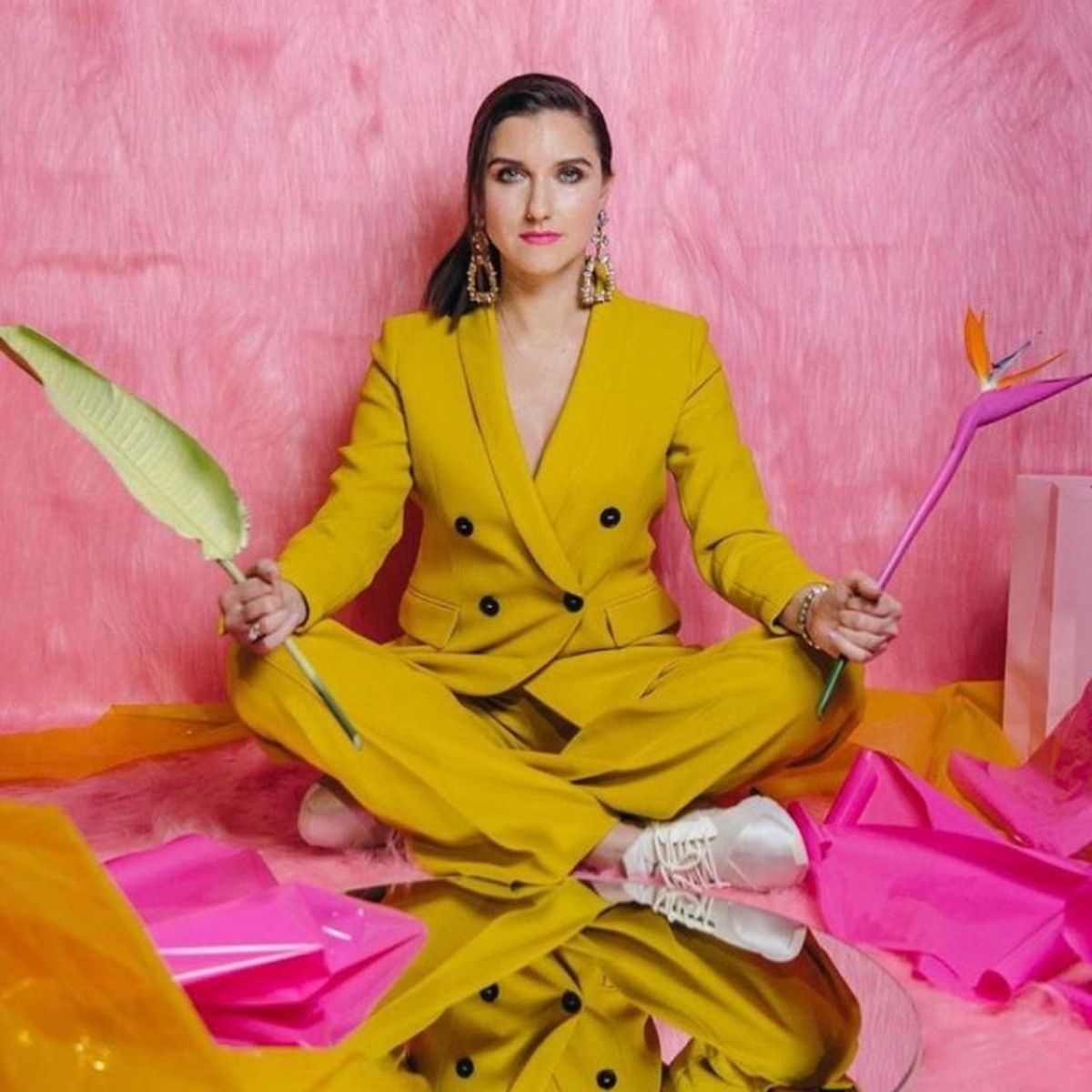 News
These Are the Thursd Floriculture Awareness Campaigns of 2020 Learn how these campaigns represent everyone from the worldwide flower industry.
Dec 23 | 5 min read 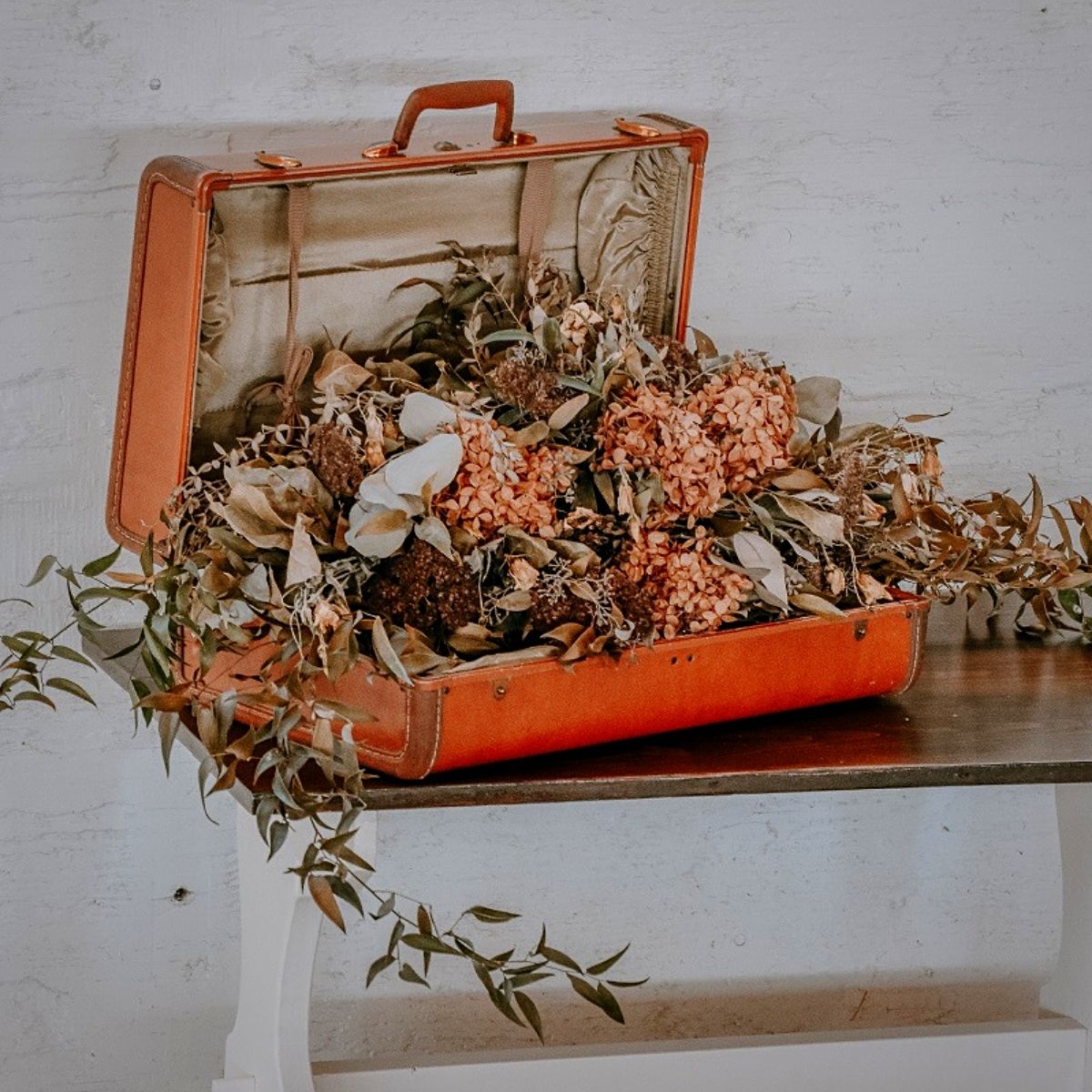 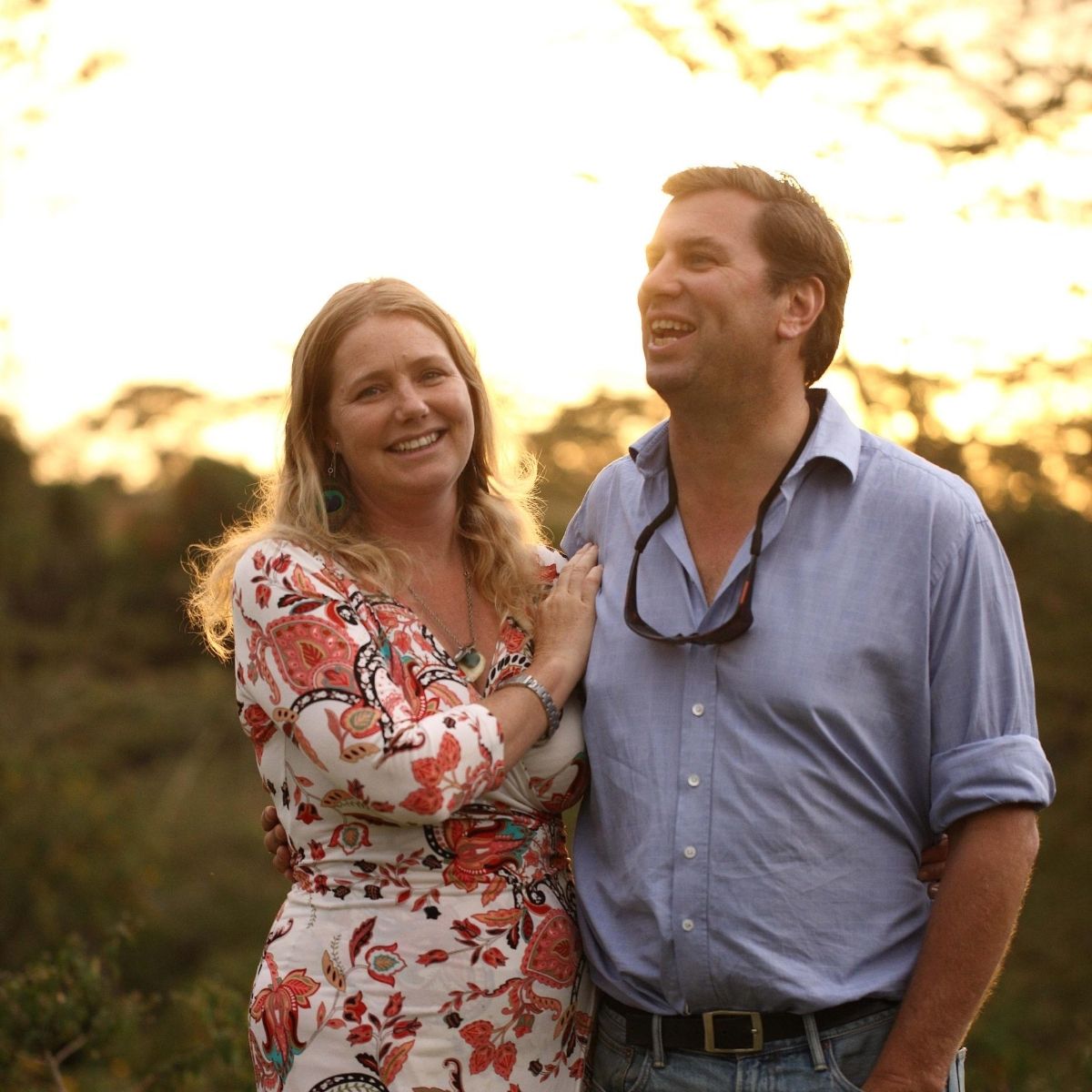 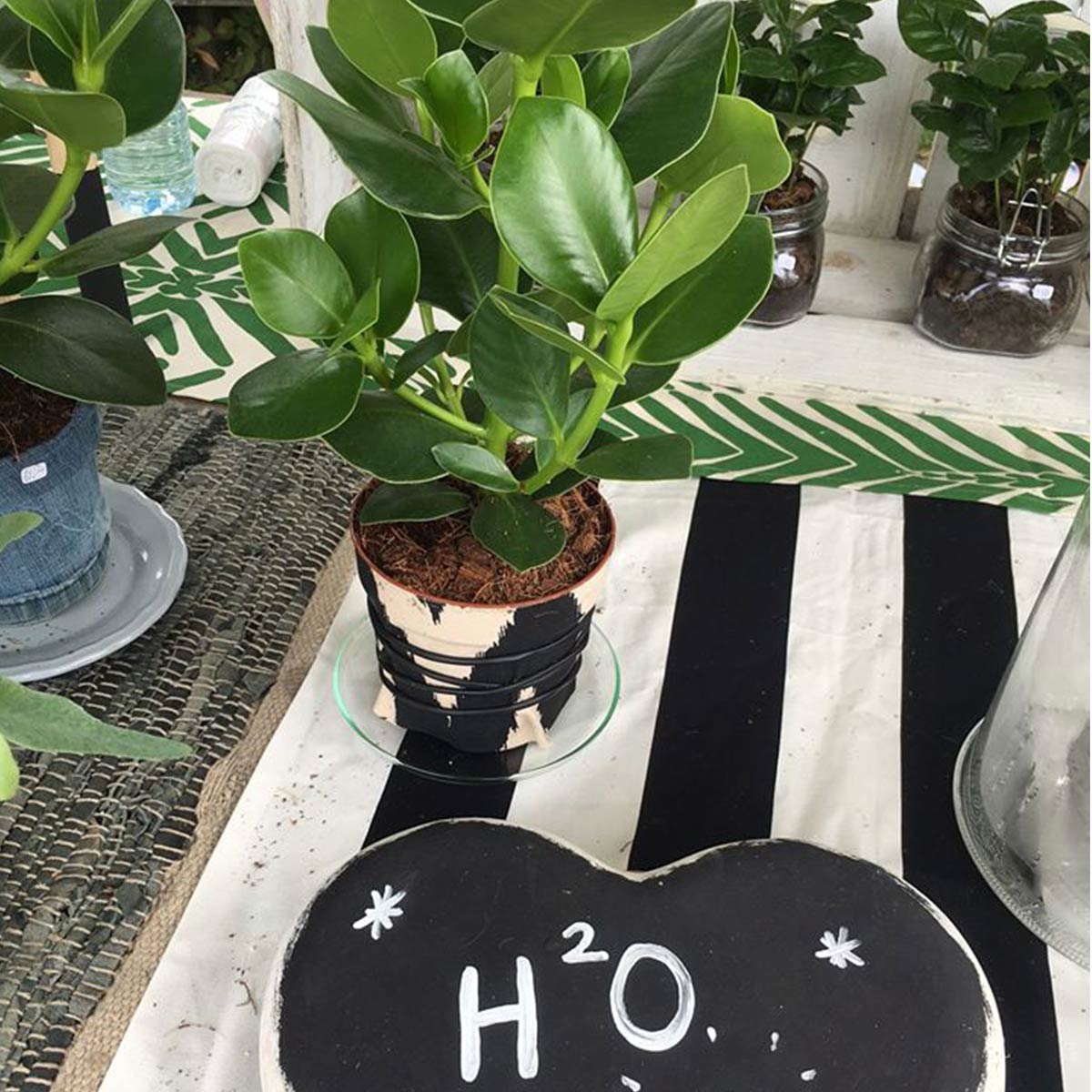 Resetting with Plants after COVID-19 And then everything, literally everything came to a standstill
Jun 17 | 2 min read 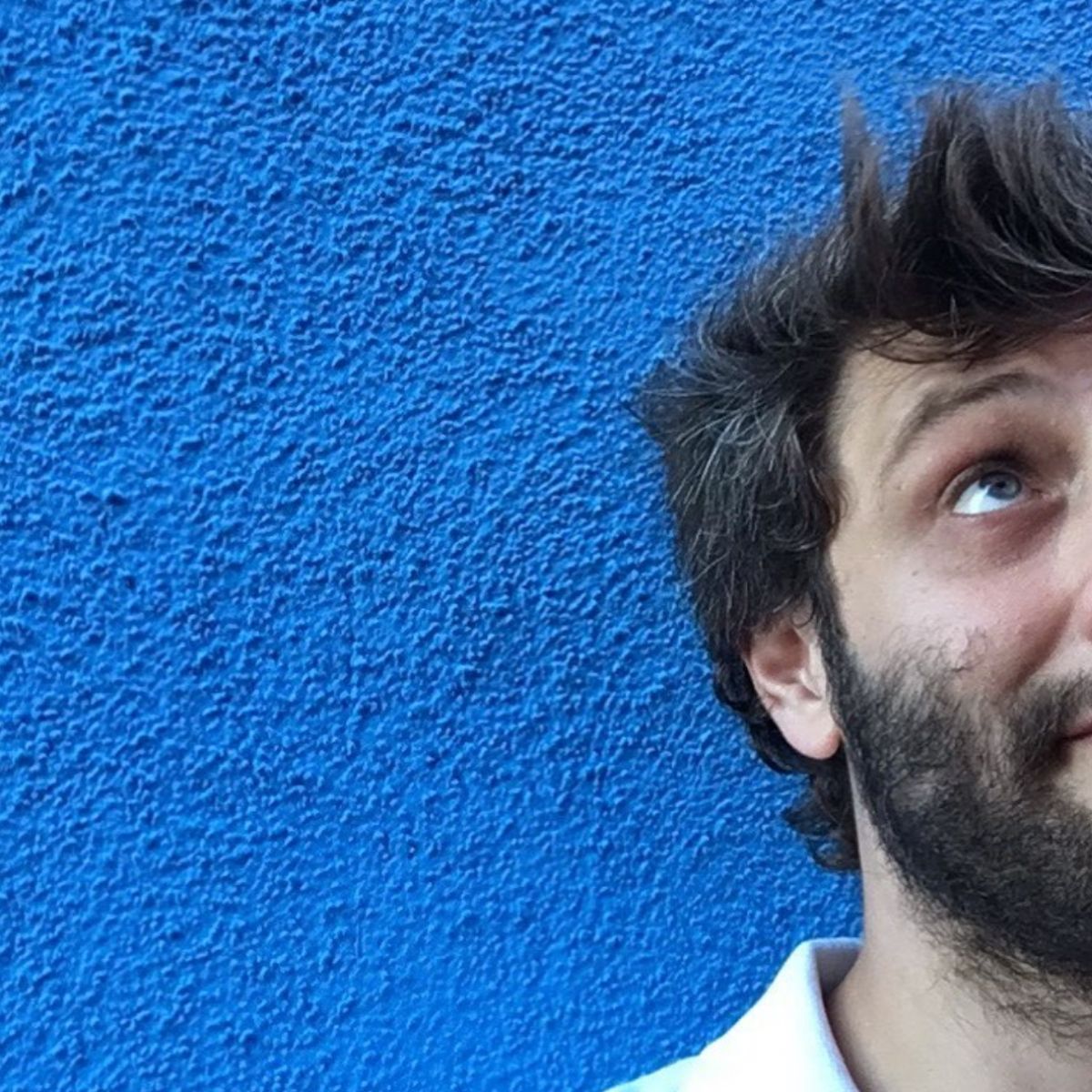 News
Michele Squeri (Italy) What does the COVID-19 situation look like for Otto Quattro Eventi?
Jun 10 | 4 min read
ALL ESSENTIALS ALL FLORISTS ALL PRODUCTS ALL GROWERS ALL BREEDERS ALL TRADERS