The Flowers of Bali

There is a common misconception among our non-Balinese customers on what are true, local Balinese flowers 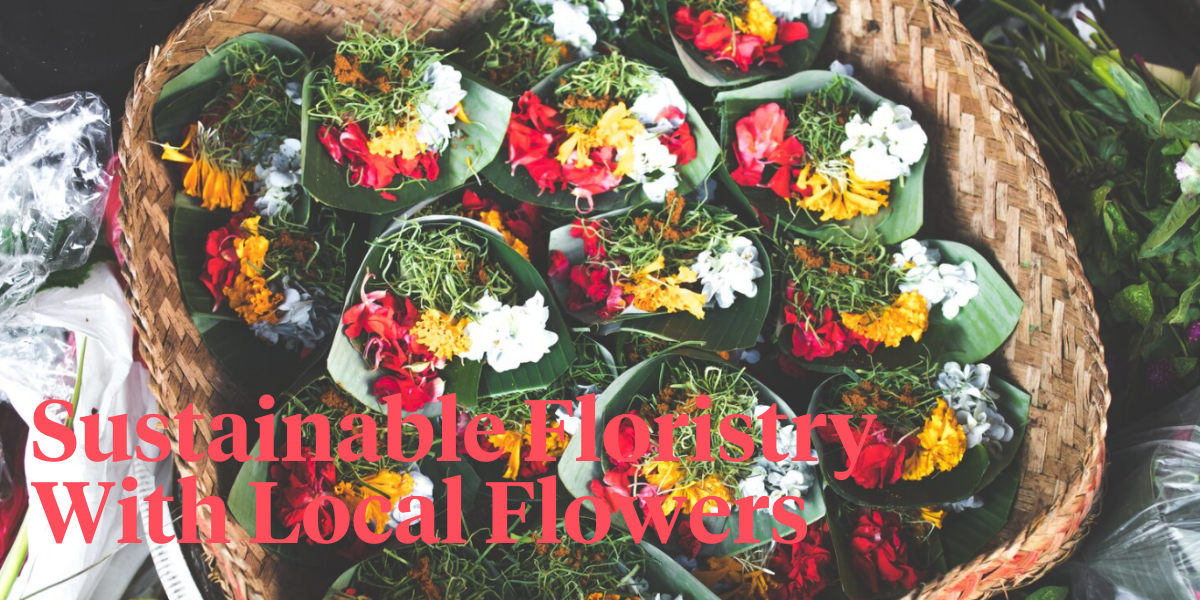 Since The Bali Florist is striving towards being a sustainable florist, we make the effort to source flowers (both tropical and non-tropical) from local nurseries and ensure their quality before incorporating them into our bouquets and floral designs. One interesting fact that struck us from the time we started our florist: there is a common misconception among our non-Balinese customers on what are true, local Balinese flowers.

While in Bali, one can’t help but notice a myriad of colorful offerings consisting of mixed flowers seen all over the island, particularly near temples as well as during religious ceremonies. It’s also not easy to miss the beautiful Balinese-style gardens filled with tropical flowers and greenery all over the island. However, how does one know if these blooms are local flowers, or are they not? 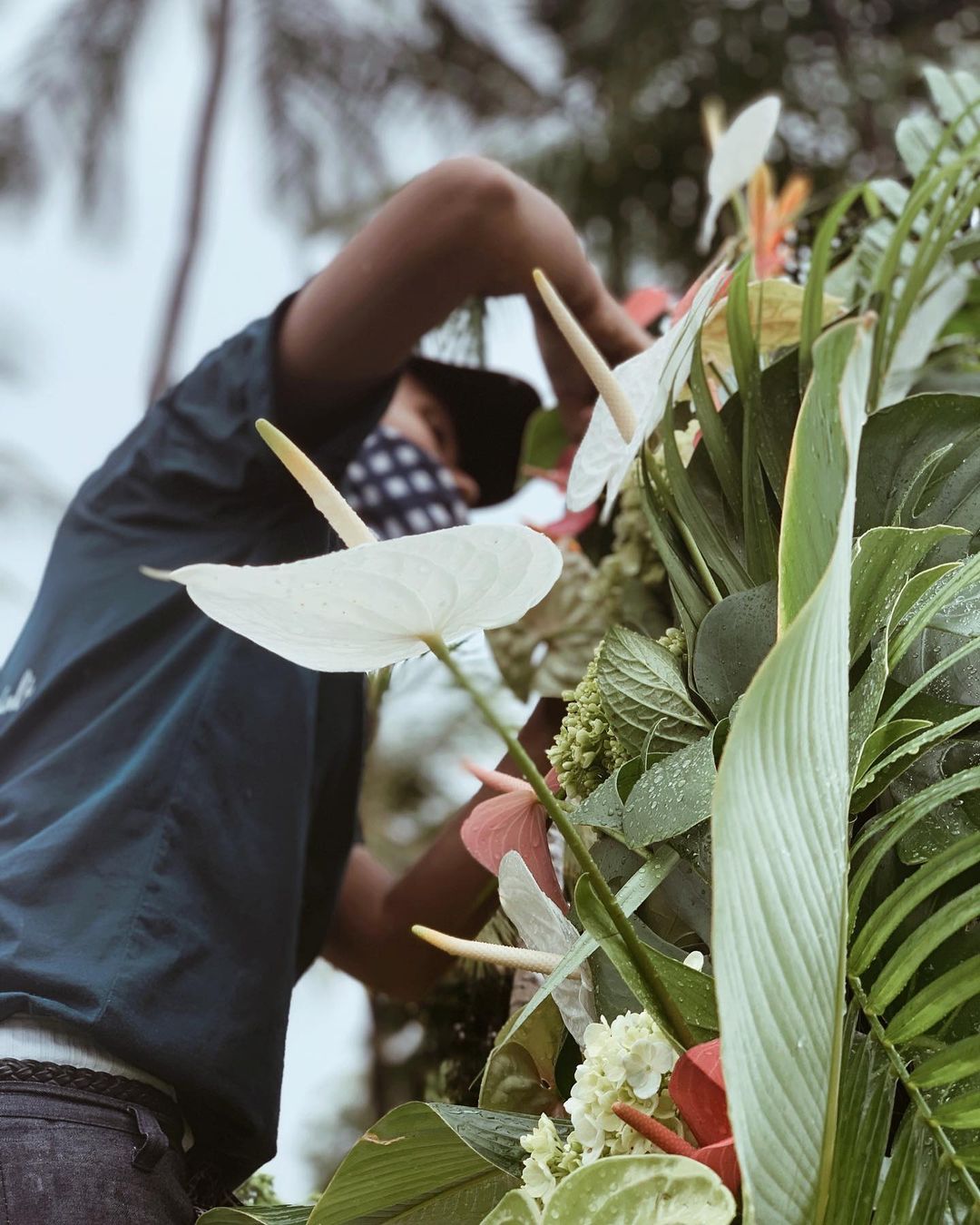 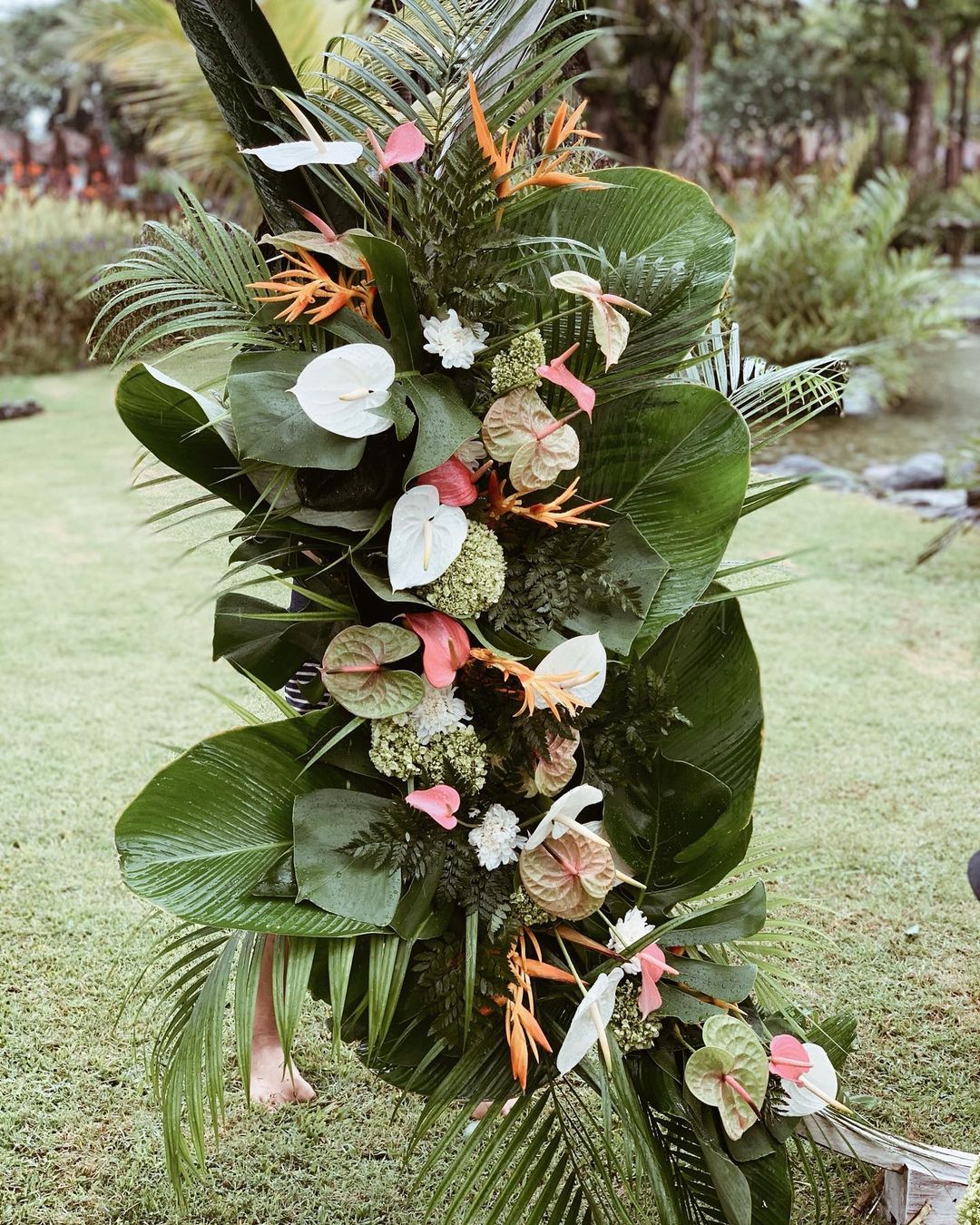 The Bali Florist’s artisanal approach features a fusion of East-meets-West style and we often receive occasional requests for a bouquet or centerpiece using traditional Balinese flowers. In hotels or guesthouses, one would not only see offering flowers but also centerpieces with tuberoses, heliconias, chrysanthemums, and orchids. Many of the flowers spotted here are actually flown in from outside of Bali, namely Java island. For example, the tuberoses (or locally known as Sedap Malam) which are often displayed in hotels, restaurants, and spas are not traditional Balinese flowers and are grown/sourced from Java. 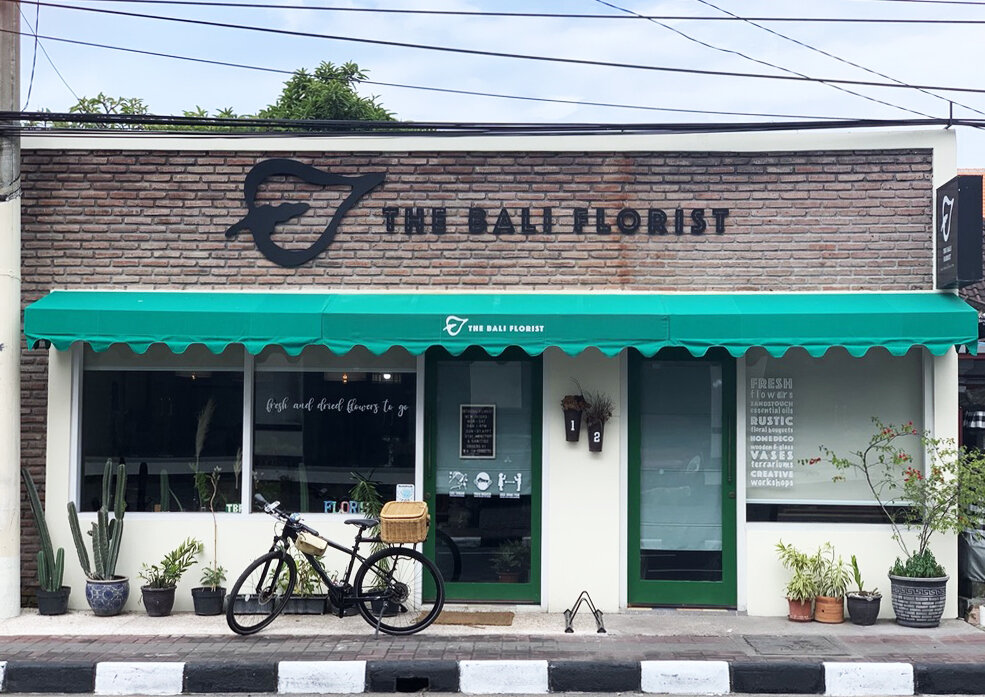 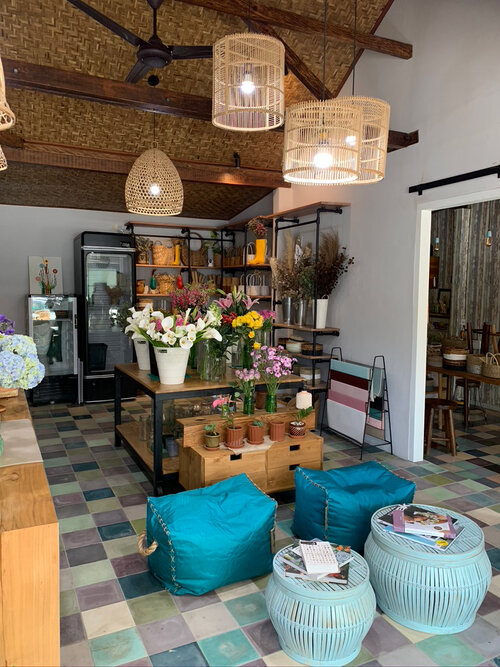 This poisonous species of flowering plant, native to the African and Arabian regions, is a popular houseplant and bonsai in temperate areas. Mainly seen in gardens and not as cut or ceremonial flowers, Adenium obesum is typically propagated by seed or stem cuttings. 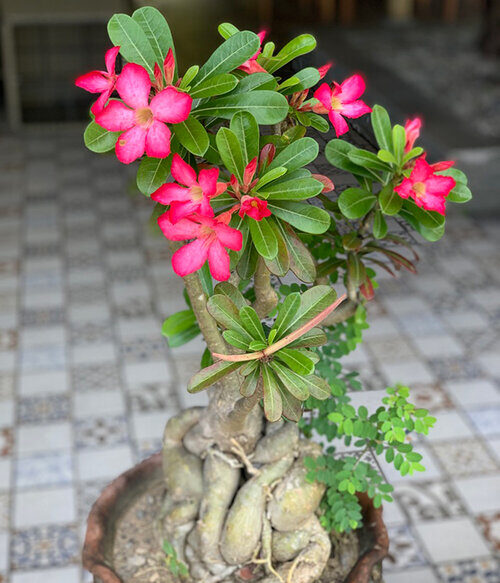 A flowering plant native to the Americas (from Mexico to Argentina and the Caribbean islands) which are often also called tailflower, flamingo flower, and laceleaf. Most Anthurium species can be grown as houseplants, or outdoors in mild climates in shady spots. Anthuriums are widely used in Bali as cut flowers in floral arrangements and are quite long-lasting in the tropical climate – up to 2 weeks in cool, indoor areas. 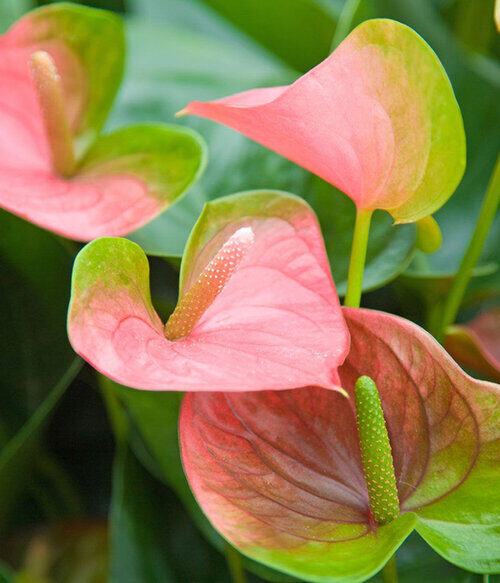 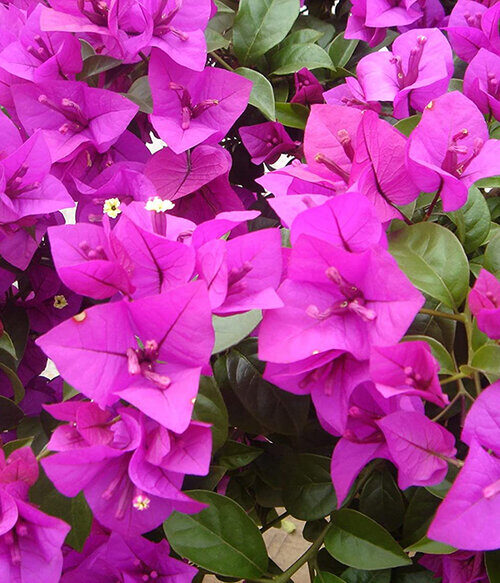 Frequently used in essential oils for aromatherapy and other spa-related purposes, Cempaka has a very distinct, soothing scent. In Bali, Cempaka is the priority flower used in all religious ceremonies, and due to its seasonal nature, it can be expensive when in demand. 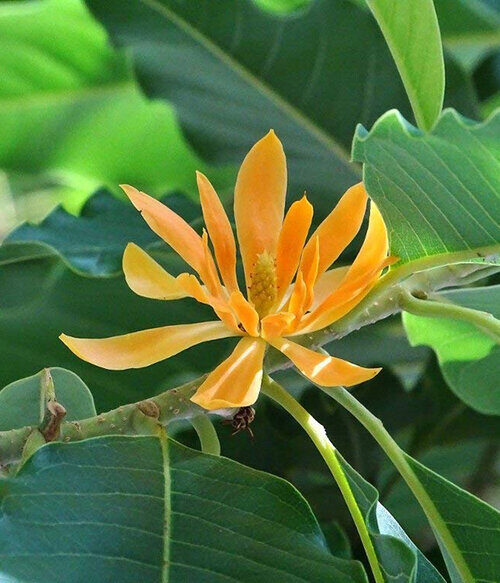 This plant can be seen almost everywhere in Balinese house gardens as ornamentals in landscaping because of their striking overall forms as well as tolerance to drought and heat. Originally from the deserts of Southern Africa and Madagascar, euphorbias have growth forms similar to that of cacti, right down to its thorns. 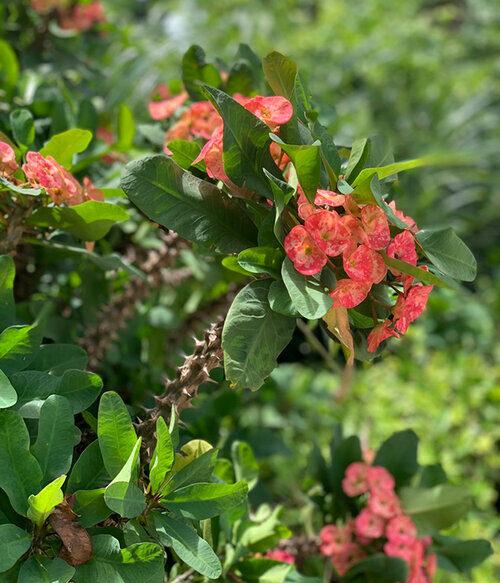 Endemic to Mexico, Central America, and the Caribbean, the plumeria (as scientifically named) is grown as ornamentals in warm regions. This is the ubiquitous Balinese flower, showing up as garden plants as well as in every ceremonial procession. Its fragrant nature also makes it popular for use in essential oils and spa-related products. 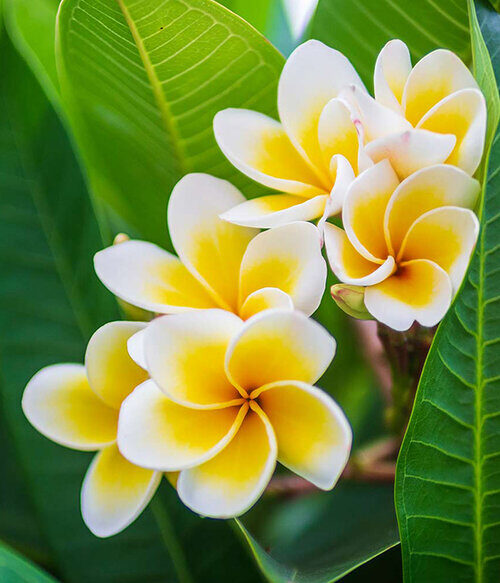 These fuchsia-colored round and stubby flowers are essential in Balinese daily prayers and ceremonies. Bunga Ratna, as it's commonly known in Bali, grow abundantly as bushes on the sides of paddy fields. We mostly see the fuchsia version used for offerings but not the white or pink species. Unfortunately, gomphrenas do not have sturdy stems, making them challenging to use for floral bouquets. Though it can be dried, it loses its vibrant hue with the heat. 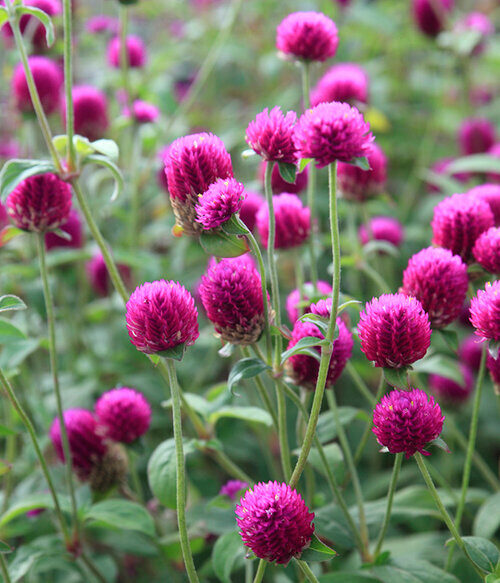 Available in various colors and forms from thin to thick versions, heliconias in Bali are available throughout the year, mostly as garden plants. They range from dainty orange-yellow types to thick (and rather masculine) red and yellow forms, all of which can be used as cut flowers. These flowers are ornamental plants and are used as decorative material in restaurants, hotels, and ceremonies in Bali. 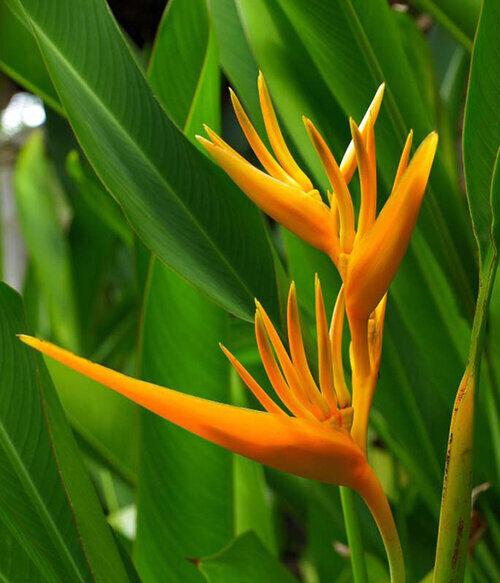 Similar to the frangipani, this plant can be seen in gardens all over Bali and is appended on Balinese stone statues for religious purposes. The dominant hibiscus species in Bali is the red one, while yellow and oranges varietals are less abundant. Native to tropical regions around the world such as India, the Philippines, Tahiti, and Hawaii, the hibiscus flower can also be dried and used as tea due to its red color, tartness, unique flavor, and its high vitamin c content. 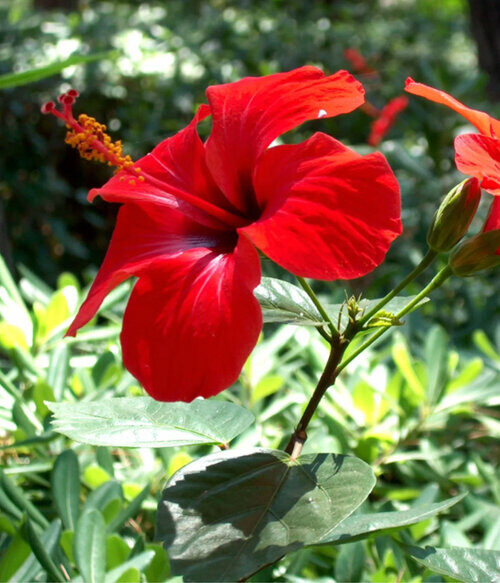 Also known as the water lily, the lotus is predominantly found in ponds and its leaves grow from the bottom of the pool of water. The leaves are incredibly water-resistant and the fragrant flower stays open for two to three days. The lotus pods can be used as a fresh and dried cut flower to supplement exotic arrangements. 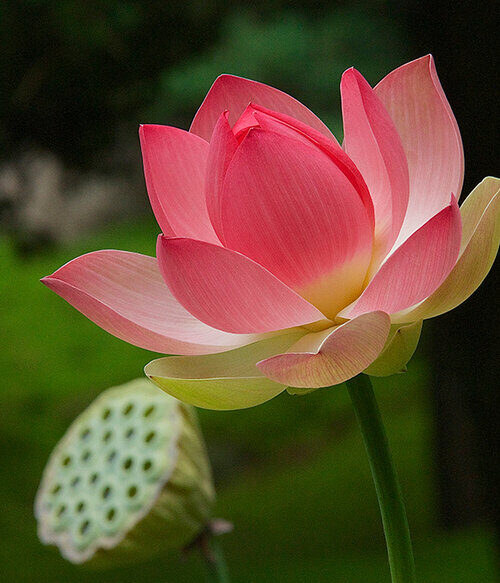 This plant is known for its use in Balinese culture since the flower is used for offerings. They are usually made into garlands and hung around the Hindu statues. In the Bali heat, this type of marigold is not recommended as cut flowers for a bouquet due to its heavy top and thin, dainty stem. Marigolds are also a decorative element in spas and hotels by floating the stemless blooms on water. 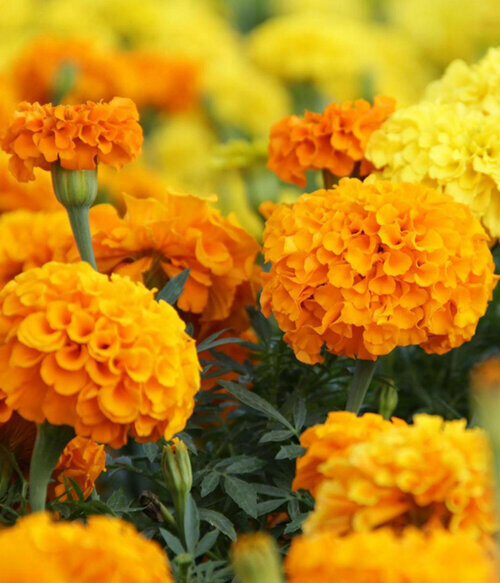 Native to India, Indonesia, through parts of Indochina, Malaysia, and the Philippines, Ylang-ylang is the flower of the cananga odorate tree and valued for its perfume extraction. Ylang-ylang has a strong yet soothing fragrance used mostly in essential oils for aromatherapy and other spa products. 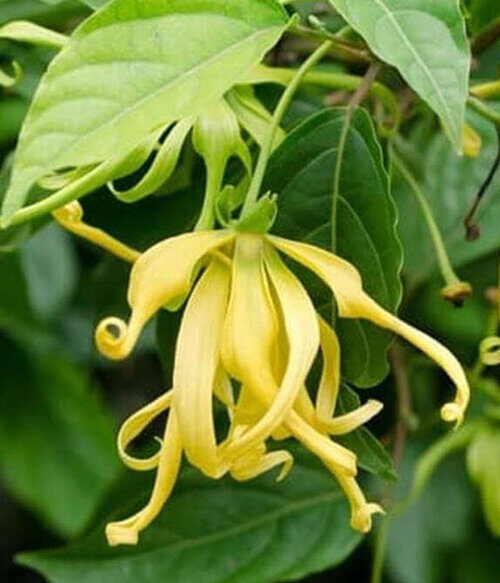 Now that we are more familiar with the flowers considered traditional in the Balinese soil and culture, we can appreciate each of their existence when we see them around Bali. We also hope that you now have a better idea of what they are best suited in our daily lives. In our upcoming blog (Part 2 of this series), we introduce those non-traditional Balinese flowers which are grown locally and commercially used as cut flowers.
florist bali balinese flowers the balinese florist sustainable floristry local flowers

Armed with a background in hotel and digital marketing, Liza Aila Latif never strayed far from her mother’s early influence; growing up as the daughter of a florist in bustling Jakarta shaped her love for nature and an appreciation for the beauty of the Earth’s flora. Her work and family life have given her the opportunity to live and travel around the world. Led by her husband's work opportunity in mid-2013, she and her family decided to deurbanize and move to Bali for a back-to-basics lifestyle – one that allows her to enjoy the outdoors and balanced life. "The desire to bring the splendor of flowers and the gifting of beauty in one collective activity is what guides my passion. I am inspired to bring a smile through thoughtful gifts and gestures, as much as I’m able to put my own creative touches to the beautiful elements I work with. I love that there are endless possibilities in creating the floral designs from The Bali Florist, as much as the blessings that will accompany each." Interviews Roses
The Ecuadorian Flower Company That Is Inspiring Worldwide IFTF was a complete success for many flower companies and Mystic made sure this was the case for them as well. Learn more about the Ecuadorian company that is conquering the Latin American flower market.
Nov 30 | 5 min read 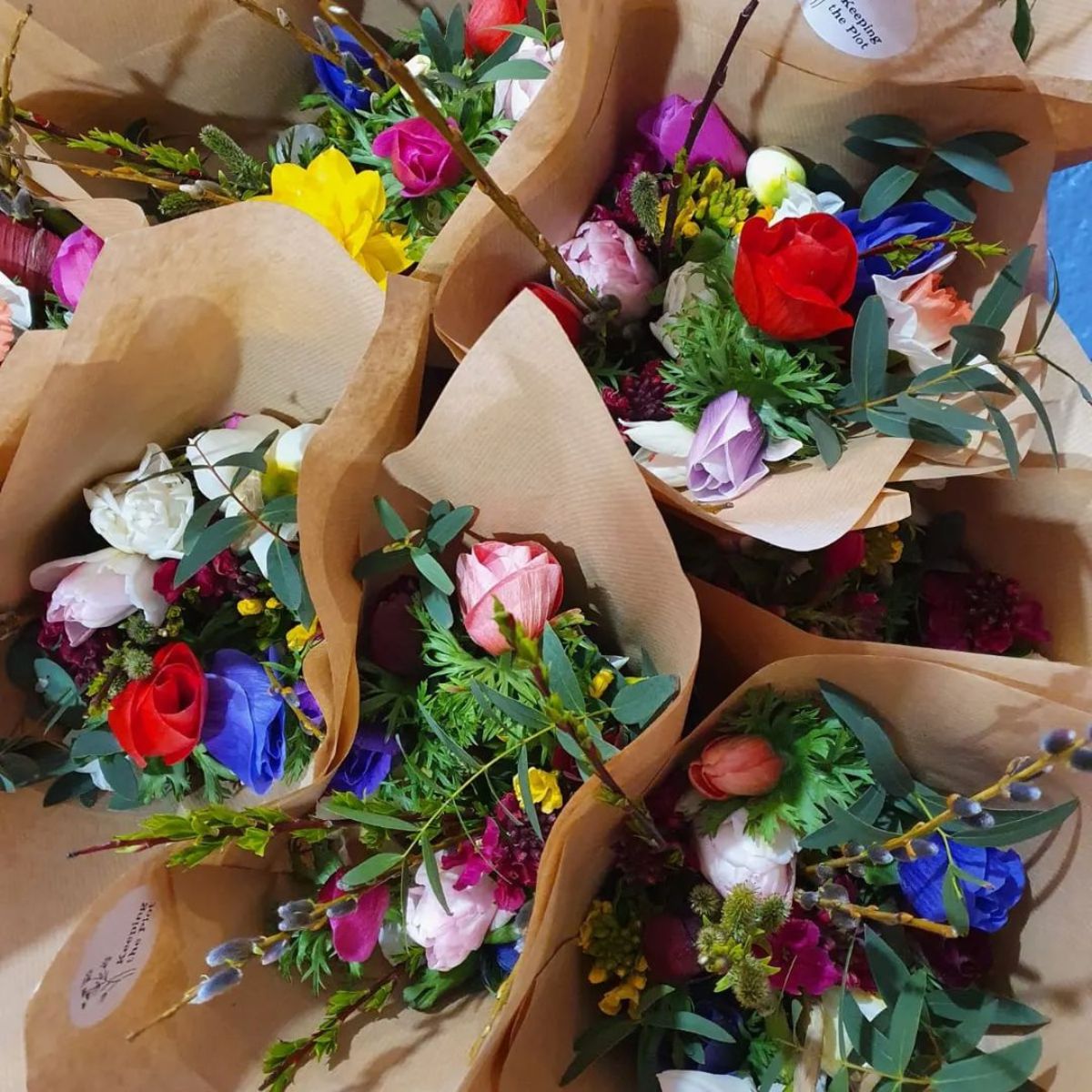 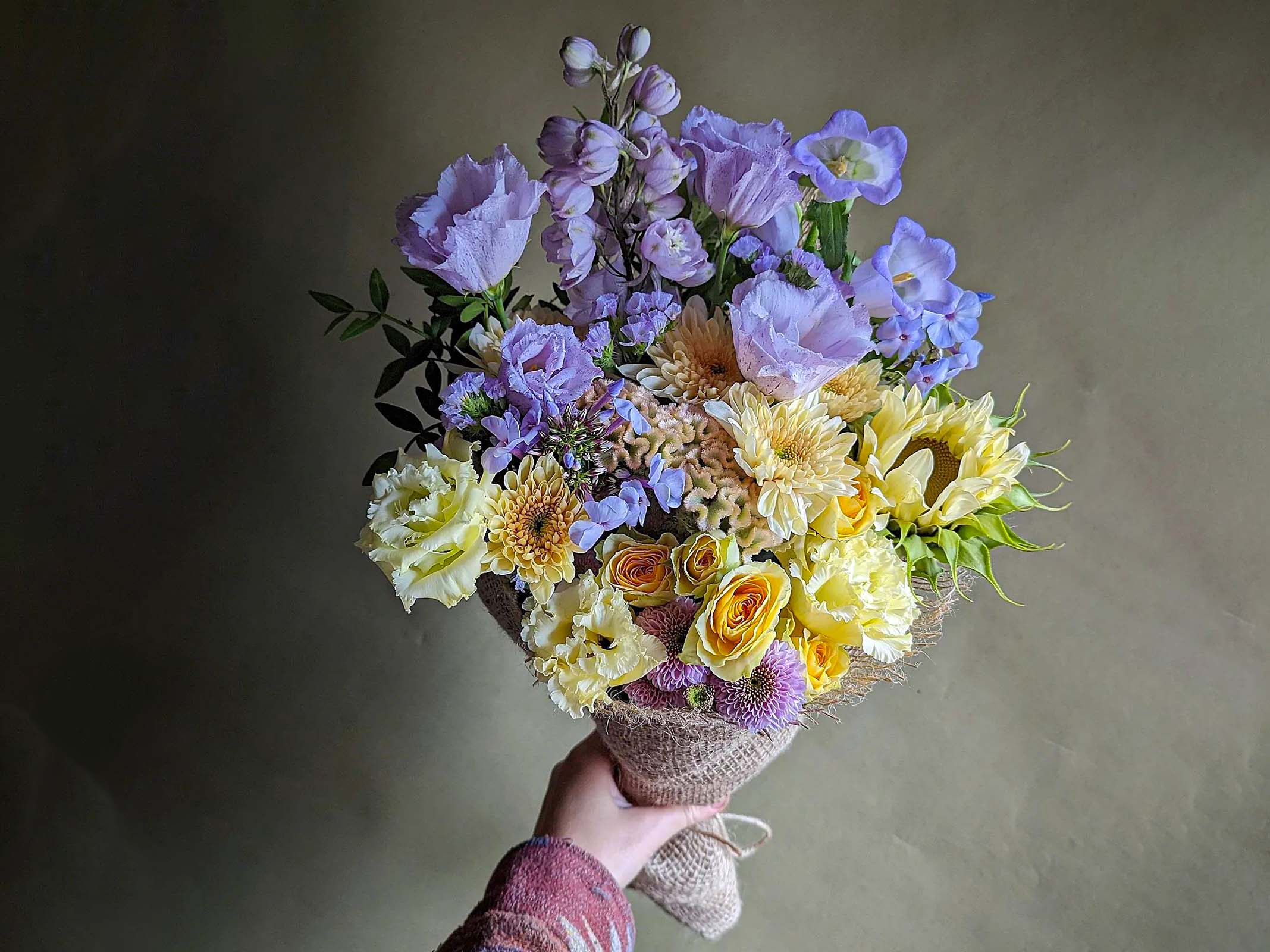 Flowers Sustainability
7 Most Sustainable Florists Around the World Here's an interesting list of eco-friendly florists that reduce their waste by making use of every bit of supplies and flowers they have around.
Oct 19 | 4 min read 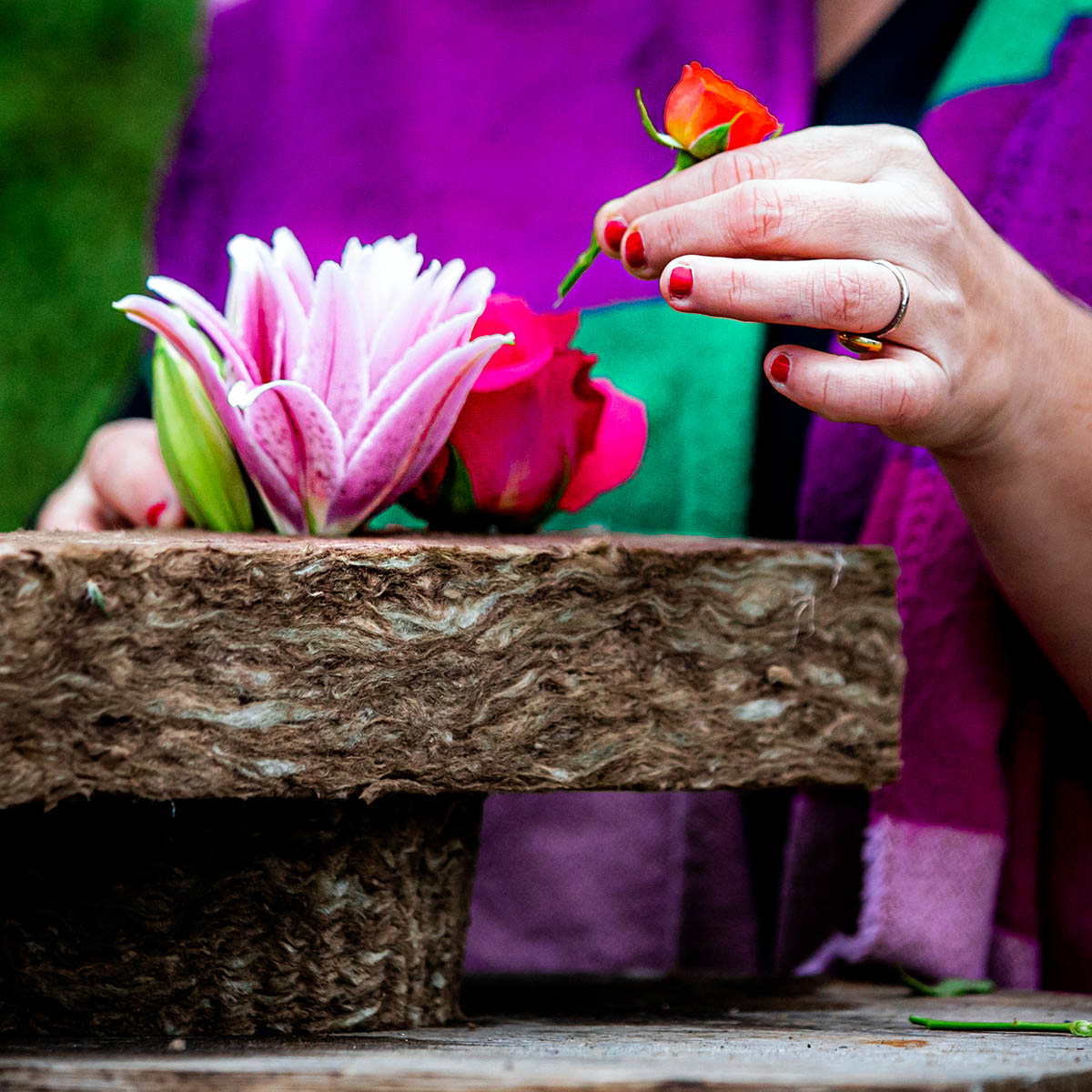 News Sustainability
Agra-Wool Has News - Sideau® Has a New 3-Blocks Box Packaging Especially for Florists An excellent alternative for floral foam actually exists! If you want to help the planet, this article is for you.
Aug 18 | 4 min read 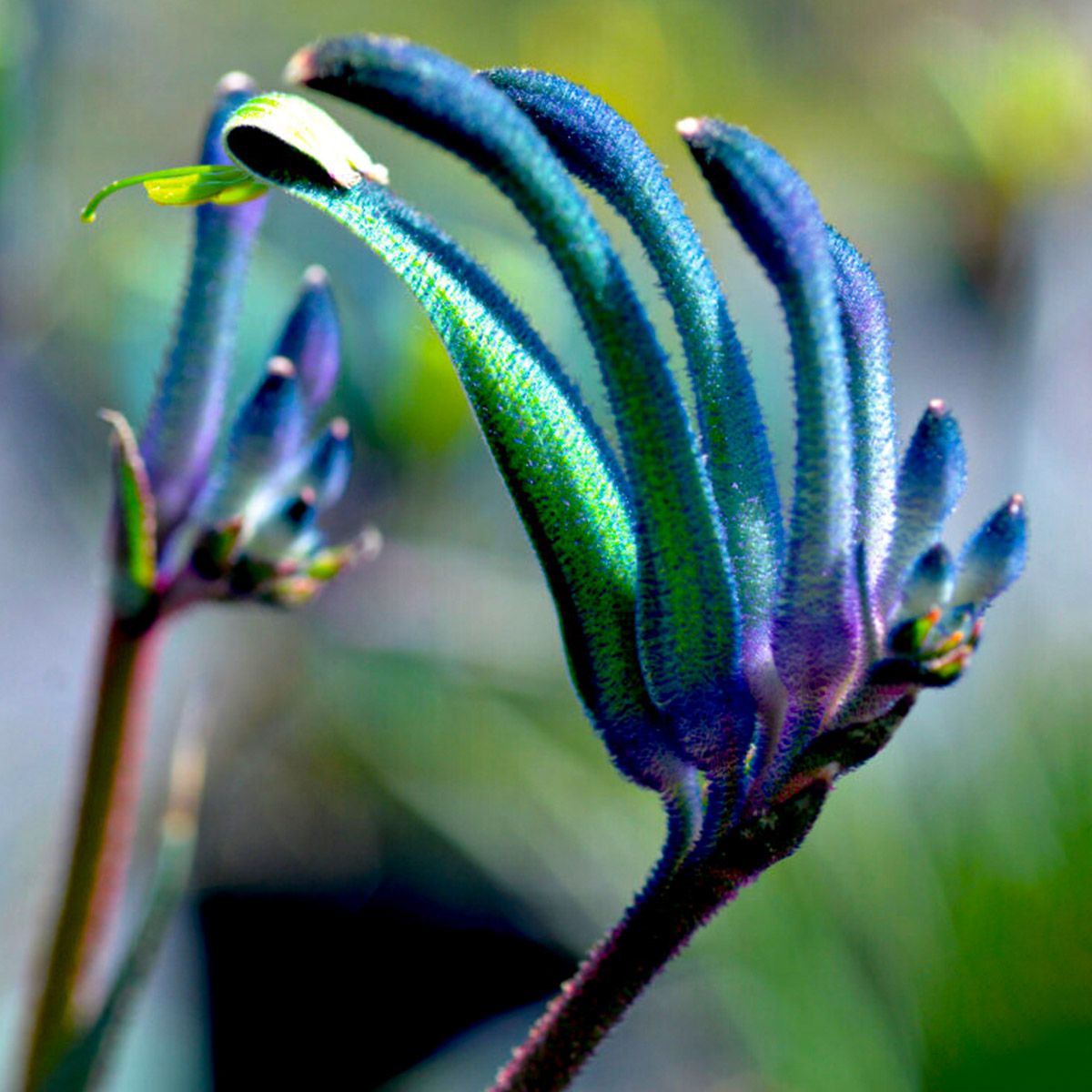 Garden Now on the markets
The Most Impressive Blue Anigozanthos You'll Ever See A field full of blue kangaroo paws exists and everyone is loving this blue plant.
Jul 28 | 6 min read 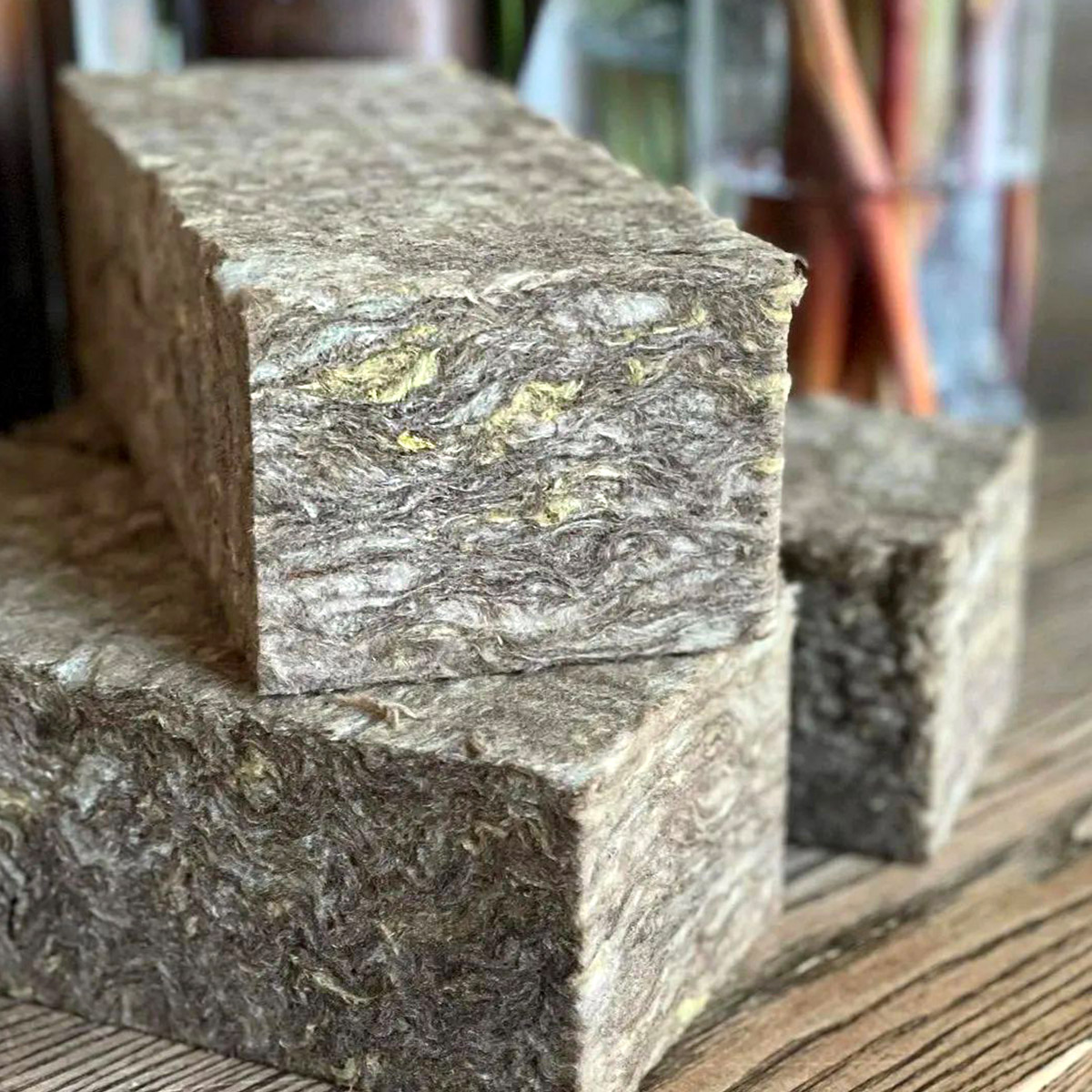